Why Does Mineral Makeup Change Color On My Face? 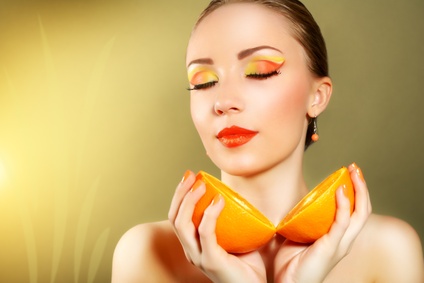 Why Some Mineral Makeup Turns Orange On The Skin

Orange shading can be quite striking when used in all the right places especially when shading the eyes and lips with a touch of Poppy blush for an exquisite finish.  When mineral makeup foundation however isn't cooperating with your natural skin tone or the pH of the skin, it can be less than glamorous.

Good Questions To Ask Followed By Learning The Answer:

Are you having shading issues with your mineral makeup?  Is your face turning funny shades of orange, gray or blanching?  Let us help you find the answer!

When first introduced to a certain brand of mineral makeup, some women have experienced color changes to their skin tone after wearing their mineral powder for a few hours.

Women would contact us for assistance, complaining about this weird change to their face when they would peer into the mirror later in the day, only to be thoroughly shocked by an orange face staring back at them.

These same women would proceed to try a neutral to beige mineral foundation shade to try and tone that phenomenon down, not fully understanding what was happening, only to now be staring at a gray pall on their skin.  Of course this manifests into something that is not even natural looking for their skin tone.

This is when we receive the emails and phone calls because women are at their wits end of trying to get their shade to look beautiful and natural.

Through formulation of our mineral makeup products we discovered the chemistry behind why other mineral makeup brands would have this strange phenomenon occur to these women's faces.

Once they disclosed the mineral brand they were using we could help them figure out the reason behind the odd changes to their shade.  In some instances it was a coating on the mineral powders that would cause the change in color such as carnauba wax which is used to treat micas to create better adherence and a creamier texture.  All minerals with this treatment would reportedly melt on the face, creep into fine lines and always turned these women's faces a pasty orange shade like that of a pumpkin.

This odd phenomenon would mainly occur within their t-zone area where they tended to be a bit oily and spread to a lighter degree across their face.  Carnauba wax was not great at stabilizing mineral makeup color as we learned, and was separating from the micas as it warmed to the skin, creating a caked look as well.

Unfortunately, when some women tried to neutralize the orange tone with a beige shade it only totally confused and frustrated them further, asking the question, "why would beige turn gray?"  They reported that they looked like death warmed over, or some other version of their true self.  We'll explain further on this below.

With painstaking research and having an understanding of color theory, Katherine (founder) investigated the color ingredient lists and unfortunately in some of the companies all colors were not declared.  However, it was clear that chromium oxide green was being used to tone down orange in a shade.

Green is used to neutralize red oxide, however it is famous for graying out a color and can be found in the majority of Olive Shades.  Mineral makeup products which use chromium oxide green will cause a gray pall and will be emphasized when it gets wet or you perspire, almost becoming ashy in tone.  Many customers are not aware of the consequences of certain ingredients used and iron oxides colors are not explained when making a purchase.

Another reason for a complexion turning orange from mineral makeup products has also been shown to occur on women who use certain medications on their skin.  In this instance there is no fault with the mineral powders but simply a chemical reaction is occurring.  AHA’s, rosacea treatment crèmes and some acne treatments will alter the color of the oxides usually having a bleaching effect on the color.  Red oxide which is a dominant color, when bleached will of course turn a weird version of orange.  If this is happening to you, investigate your skincare and if possible save skin treatments for nighttime only.  However, be aware residuals from such treatments may still be on the skin during the day and this problem may reoccur.

Yellow in a shade that is predominant, which is found in Olive skin tones, can also fade or appeared bleached with similar types of medication or skincare.  Another issue which can cause a battle on a woman's face is their skin being quite alkaline.  If the pH is not maintained in a balanced state, which can be difficult for those with oily skin, this will also have a profound alteration in color of pigments within a makeup.

For Olive skinned women that do not wish to experience this phenomenon, utilizing one of our shades from the olive / beige tones will correct much of the problem and you won't have to fear the dreaded ghost look since there is no chromium oxide green used in our mineral makeup foundations.  Only a perfect blend of the correct ratios of iron oxides is used to create perfect skin tones.

For other ladies, especially those dealing with oily areas on the face, it is a bit of trial and error, but we have assisted a multitude of women in correcting the gray or fade out through a simple change of mineral makeup products, or the dreaded orange cast with a simple change in their selection of a foundation shade.  A combination with your foundation by using a certain shade of blush which possesses more red / blue in it works wonders for counteracting the orange glow which can occur from certain skin treatments.  Strong sallow skin tones will also benefit from this same advice.  We discuss this in detail on mineral blush and lipstick also changing color and how to correct it.

Hopefully mystery solved for some of you that have also asked, “hey, why is my mineral makeup changing color?”